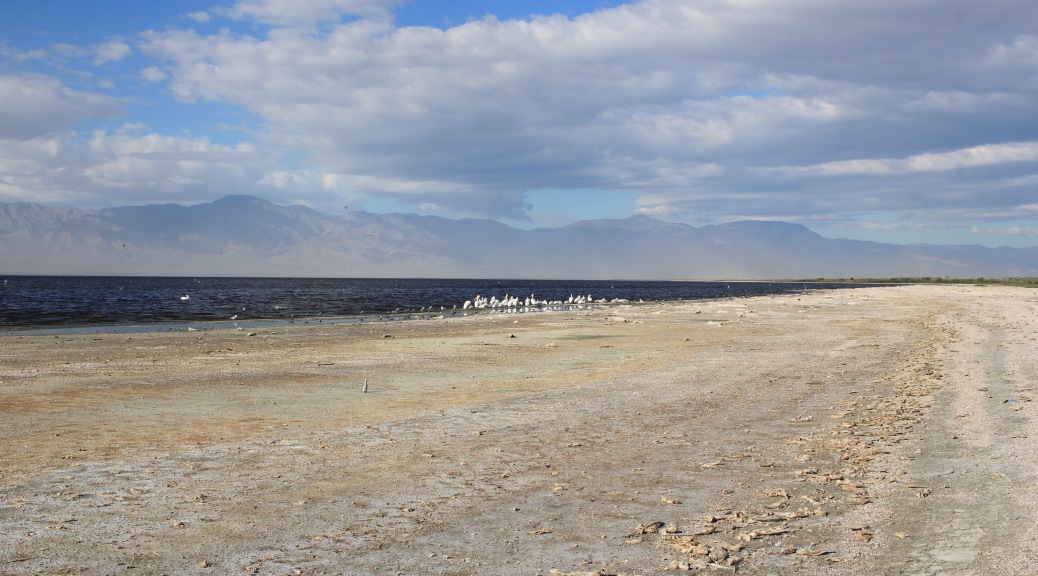 So….I was going to pick up at the California crossing, but I ought to back up a little and tell you about Salt River Canyon, in Arizona. In Pie Town we got into a discussion with a guy in the Pie Source about the best route to take for scenery on the way to California, and he recommended a route that sounded lovely, if not the shortest route. It took us through Salt River Canyon. This is about when DH started teasing me about my horrible map reading skills. To be fair, we were using a road atlas instead of a phone, since we had no service through that part of Arizona. It was rugged mountains, huge canyons, giant cliffs. It was stunning enough that I stopped taking photos because I would have filled up my memory card if I photographed every pretty sight on that route. Salt River Canyon Wilderness is a 32,101 acre wilderness area, its entire length bisected by the Salt River and its surrounding canyon. White water rafting is apparently quite popular there, and the elevation goes up to 4200 feet. I have to say that while it didn’t beat the Grand Canyon for views, it was a solid competitor. I recommend driving through with someone who can read maps, or you may end up with someone like me saying, “Hmm, that’s a canyon. Maybe that’s it?” Until, of course, you see the giant bridge across it, with the rest area on the other side, clearly labeled, “Salt River Canyon Rest Area.” At the rest area you can get out and wander down to the rocky ledges near the river, under the bridge, and it’s quite breath-taking how beautiful it is. Youngest checked out the restrooms and told me a big story about how there was no toilet, you just went in a hole above the river. I chose to think he was pulling my leg. Oh gosh, how I hope he was. After the Salt River Canyon (and kudos to DH for driving it – he kept looking at me, on the windy roads, and saying, “Hey maybe you should drive this part!” And I just glared at him in response) was our stop in Avondale, Arizona.

The only other stop we made in Arizona was in Quartzsite, where we picked up some “Fresh Jerky” – Tuna, Venison, Elk, and some plain old beef jerky. Not that plain – sweet/spicy and teriyaki. So so very delicious. DH thoroughly enjoyed the tuna jerky while Milo stared at him hopefully. I also wandered across the road, while DH was getting gas, and went into a store that claimed it sold everything (and inside it had a warning: “You will find things here you paid a LOT MORE FOR somewhere else”) where I bought a hackey sack for a dollar. A hackey sack is a little beanbag type ball, and in high school we played quite a lot. You stand in a circle and just kick it around – the only rule being that you can’t touch it with your hands. I was reminiscing, and on my way to my high school town, to stay with a friend who probably taught me the game. It will surprise no one that we never brought it out. Not after DH looked at me and said, “Do you really think you can all still play at your ages?” After I punched him I realized he was probably right. Anyway, I have a shiny new hackey sack just the same.

Now. On to California! We stopped at the agricultural checkpoint long enough for a guy in a uniform to say, “No, come on, you’re fine.” I assume he was using X-ray vision to determine how much produce we had inside. Or you know, he saw the New York license plates on our RV. Either way, we skated right through. The closest thing to fresh produce in our RV was that jerky, and it was being eaten pretty quickly.

California, when you enter on the 10, definitely screams drought. Part of that is that you are entering in a desert. We journeyed past the Joshua Tree National Park, which I had never seen, and I told DH how everyone I knew in San Diego would go out there and camp, and how I never really got the attraction. I’m more of a mountains, rivers and trees girl, I suppose. But I have to admit it was prettier than expected. Almost alien, with the huge rocks and warped trees, and the miles of nothing but sand and scrubby plants. At times rocks rose on either side of our RV, and I started to see the appeal – the dead silence, the starkness of it all, the calmness. We pulled over at one point and poked around in the desert. DH wandered off looking for rattlesnakes (really!) while I freaked out and said, “NO NO, you aren’t suppose to LOOK FOR THEM.” Then I turned to Youngest and said, “Keep your ears peeled. You know what they sound like, right?” And he rolled his eyes and said something like, “Duh, mom.”

Our stop that night was in Thermal, California. Thermal is just Northwest of the top of the Salton Sea. The RV park was lovely, and we were warmly welcomed. In fact, more warmly welcomed than we were at any other RV park to date. The woman at the front walked us around, showed us the pool, the bathrooms, the laundry, and invited us to pick fruit from the many trees. Grapefruit, lemons, oranges, tangerines, and dates were everywhere. Unfortunately it was October, so there wasn’t much to be had. After we parked and put our slides out, we could have opened the dinette windows and picked oranges…had they not all been either rotten or green. We did manage to score a couple of nice lemons, though. I wanted dates, but the dates were swarming with bees, and I was a bit too nervous to dive in. We tried to swim, but the pool wasn’t heated, and even Thermal gets chilly at night. So our swimming lasted long enough for DH’s voice to raise an octave and then we were done.

The morning after Thermal, we headed over to see the Salton Sea. I’d seen photos of it before, and always wanted to go myself. It’s not beautiful. It’s apocalyptic. It is a photographer’s dream, however, if you’re into catching moody and stark scenes. The Sea was created accidentally. In 1905, engineers decided to dig irrigation canals from the Colorado River into the valley. They then made a cut in the bank of the river to increase water flow and prevent silt buildup. The resulting outflow overwhelmed the canal and filled the Salton basin, which was a dry lakebed at the time. The Salton Sea’s surface area is about 350 square miles, making it the largest lake in California. The salinity of the Sea is greater than that of the Pacific Ocean, and tilapia both thrive and die in large numbers, depending on the outflow into the Sea and the temperature changes. When we were there, the shore was littered with dessicated tilapia, eyes gone, bones showing. We initially brought Milo with us to walk up to the water, but after he discovered FISH YUMMY DEAD FISH DH had to take him back. The bird population is insane – one year an arctic gull was spotted there, and because it is a common stopping point during migration, over 400 avian species have been spotted there. When we were there we saw a lot of pelicans and gulls, but that was about it.

We left the Salton Sea and headed off to Lake Piru, northwest of Santa Clarita, in Fillmore, California. Lake Piru seems to be a hidden gem – and we hit the park during off peak, so it was fairly empty. You could tell, however, that summer time would bring crowds. It’s the only lake in the county that allows swimming. On the way to Lake Piru we passed a ranch, and as is our norm, we said, “Look Milo, moo dogs!” Then we both went, “OH MY GOSH ZEBRAS! And a camel!” Turns out it was a ranch that rents exotic animals out to movie studios in the Los Angeles area. They even had an ostrich. Once Milo caught a whiff through my open window, he stood up on his hind legs and proceeded to whine the dog words for, “Please let me out, I must chase them and sniff their bottoms.” Needless to say…we didn’t. While in Lake Piru we sighted dozens of deer, just browsing in the foliage, not concerned about all the two legged (or four legged, in Milo’s case) creatures. The only time they ran is when Milo tried to speak to them. I don’t speak dog, so I can’t swear to it, but he may have come across a bit too needy, and that scared them away.

After Lake Piru it was a bit of a traffic mess. But soon we started seeing places I knew. Santa Barbara. Pismo Beach. Avila Beach. All beautiful places. I texted my friend J to let her know to be ready for us soon, but we still managed to surprise her – she’d taken a nap and missed the text completely. There isn’t much to tell about the drive between Pismo and Los Osos. It was all about me saying excitedly to DH, “Look! Margie’s Diner is still there!” or, “Avila Pier is the one we used to jump from!” We did stop in Avila for a quick walk to the beach and a cinnamon roll, but we were both anxious to arrive and be done. So we rolled into Los Osos, surprised J, and backed right in to her driveway. Her dad lives next door to her, and he’s a bit of an RV fan (he has an old OLD Dodge RV he’s going to restore someday, I’m sure, really. No, really!), so thankfully we were able to hook up to electric, water, and there was even a sewage outlet in the drive.

Now is when we get into old friends, and peaceful times, and bittersweet memorials. So I’ll end this here. Imagine us, in J’s house, where her porch has an oak growing under it, with the branches all winding about and going right through the deck, so that when you sit on her porch, you feel like you’re in a treehouse. The branches arched above you, the trunk hidden, and honestly, it was a wonderful place. We now understand why she calls it the Tree House.

More soon! Tonight we are in Half Moon Bay, so you’ll have that to look forward to. Eventually.

One thought on “Arizona to California”

The innerwebs keep us together.